For several months, I’ve been working on a system to check the quality of equipment for the sport of fencing. This project was commissioned by H.O.M. Fencing. Below are the steps I took to build the Kaleel Fencing Equipment Testing System: 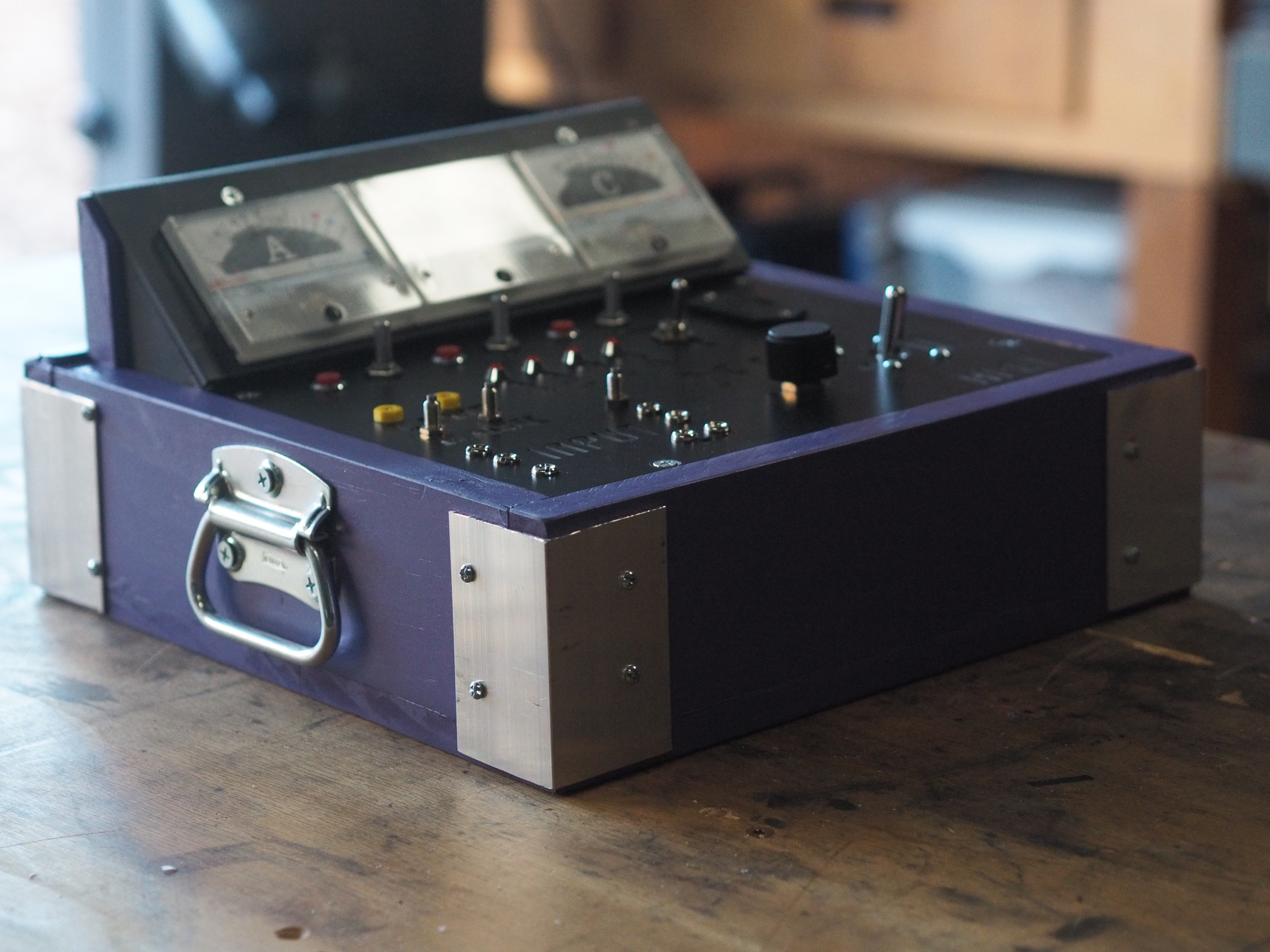 For several months, I’ve been working on a system to check the quality of equipment for the sport of fencing. This project was commissioned by H.O.M. Fencing.

Electronics are used for the scoring system in fencing. Each fencer has a sword connected to a body cord, connected to a reel at the end of the strip. This reel connects to a scoring box. Whenever each fencer hits the other, the electrical loop is completed and the scoring box registers this. The tester, dubbed the Kaleel Fencing Equipment Testing System (KFETS), checks the resistance between each side of three separate wires and checks to see if there are any shorts between each.

In the right diagram (credit: Blue Gauntlet Fencing), the three types of body cords are layed out. They all have 3 lines: A, B, and C. The box checks resistance on each line and if there any shorts between them. The body cords plug into the swords and depending on the sword (there are three different swords in fencing, each with their own rules), the box can check their properties.

Before starting this project, I researched to check if anyone had made a similar project in case I could use some aspects of their designs. I found similar boxes, but most of them had a 1-meter layout instead of the 3-meter design that my client had emphasized.

The main idea that I gleaned from these designs was the resistance meter being an analog-style ohmmeter based on an ammeter wired in parallel with a 1 ohm resistor and with a 1.5 volt battery, adjustable with 5Ω, 10Ω, and 100Ω potentiometers. To the right is a schematic (provided by my client) for a box that tests lines A-A, A-B, B-B, B-C, C-C, and A-C independently on one meter. I used a similar meter and buzzer design.

The rest of my research consisted of checking the rules and regulations governing resistance limits for equipment (1Ω for body and mask cords, 2Ω for weapons, 5Ω for the lame) and checking the grounding line for weapons (the C line). Click here to view the 2017 FIE Handbook for all fencing rules.

The stages between research and a final product can take a long time, with many iterations and prototypes in between.

After obtaining all the parts, I connected everything with jumper wires and a breadboard for PCB-mount components.

After I was satisfied with how everything was working, I realized that I needed to make circuit boards to mount buzzers (responsive to shorts) and to mount the parts that run the meters. So, I learned how to make boards:

The first method I learned was acid-resist PCBs, which is how the two above were made.

After everything worked, I soldered together the circuit. After some troubleshooting, the prototype worked. I screwed everything into a sheet of MDF:

The short lights in my first prototype were connected by a circuit board, as were the meter panels displaying resistance. These circuit boards were the first I’d ever made, evident in the uneven hacksaw cuts on the side :), but were a good foray into the world of circuit board making.

After prototyping, I knew which connections I wanted, I had drawn rough schematics on paper while wiring. I finalized my initial schematics. The next step was to digitize my schematics and print a circuit to transfer. After transferring the design onto the copper clad board I etched the circuits with ferrochloric acid. Next, I used my drill press to drill out the component holes.

I soldered together the board then connected the relevant points to a rotary switch in the middle of the board and the 6 input sites to these boards. At this point, I had to do some troubleshooting.

Due to the way I had wired the board to make all of the short lights and buzzers run off of one battery (possible, but I didn’t know how to do it), the circuit naturally shorted itself. I tried using an X-Acto knife to break the copper tracelines and surface-mounted in diodes. When this didn’t work, either, I ended up only wiring the non-cross-shorting short-testing circuits. Thus, the prototype was only partially functional, but served enough purpose that it was useful.

To optimize the modular style with which I had designed the boards, I used screw terminals to connect all variable connections, which came in handy for maintenance and troubleshooting.

From the outset of the KFETS project, my client knew that he wanted it to be as sturdy and unbreakable as possible. To ensure this, I searched for “milspec” (military specifications) parts. The two parts which I focused on were the ones that would endure the most abuse: the mode switcher and the central switch.

Above: the central switch in my PCB and schematic:

I designed the central switch to be a 4-pole, 3-position rotary switch. Any 4p3t switch with military specifications available online was out of my price range. So, we went to eBay! For a fraction of the price, we were able to secure four strong rotary switches from Russia.

Pictured above, right: thin ribbon cable mid-solder to the heavy-duty switch (before I realized what a terrible idea this was and redid it with much lower gauge wire!)

The mode switcher provided more issues during the project. It arose as a means to fix shorting issues which I had been experiencing since one of the first revisions. At first, I thought I needed a 3 position toggle switch, but after the size I needed proved nearly impossible to find, I realized that I could do the same thing with a much cheaper and available 2-position, 6-pole toggle switch, which was also very stable.

Using easyeda.com and a similar design that I had prototyped earlier, I made a schematic and a PCB. To the right is a timelapse of me designing on easyeda.com.

I then exported the PCB as an SVG.

2. Setting up in Easel

In order to cut the piece, I broke the PCBs into 3 parts: the trace outlines, the holes, and the board outline. Using “Select Same > Fill and Stroke”, I isolated each part.

Next, I would trace the bitmap path of everything left after the selection and put that file into Easel in the same orientation.

Since each design was laid out with the same orientation, scale, and homing position, I could maintain the same homing position between the three cuts and be sure that approximately the same board was being cut.

Now with a couple mostly-working prototypes under my belt as well as newfound circuitry knowledge, I set to work to on the final KFETS.

Following general specs defined by my client, I designed a top panel in Easel, Inventables’ CnC program. I cut the final top panel in ¼” thick cast acrylic that I had spray-painted black on top. This way, when I cut the panel on CnC, the engraving would stand out in white.

Next, I cut out the five circuit boards for the KFETS. After some testing, I realized that I made some mistakes so I ended up taking an X-Acto knife to some connections to break the copper and soldering on jumper-wires to correct them.

I mounted the panel-mount pieces and soldered wires to their backs with connectors on the end to make the pieces more modular, and then I mounted the PCBs to the bottom of the box. I fit the meters into their panel and threaded their wires around the back to connect them to their respective controllers.

Finally, I slotted in the panel. I didn’t cut most of the wires short enough, so I had to push down on the panel while screwing it down.

At last, the final KFETS.

And, the KFETS in the wild.